Memorial Candle Tribute From
Philbin-Comeau Funeral Home
"We are honored to provide this Book of Memories to the family."
View full message >>>
In Memory of
Martin H.
McNamara III
1927 - 2016
Menu
Send Flowers
Plant a Tree In Memory of Your Loved One
Click Here 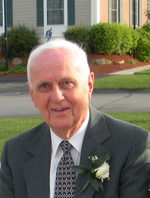 Clinton-Martin H. McNamara III, 89, passed away peacefully surrounded by family on Wednesday, December 7, 2016, following a brief illness. He is survived by his beloved wife of 69 years, Helen (Regonini) McNamara; their children and spouses, Leslie McNamara of Lancaster; Kathleen Garrity & Francis; Martin H. McNamara IV & Joanne; Donna O’Toole & Philip; Carol Gaw & Gerald; Maureen O’Malley & George; John McNamara & Paula, all of Clinton; Kevin McNamara & Diane of Sterling; Helen McNamara & her fiancé John Mattiace of Manchester, NH; Patrick McNamara & Susan of Leominster; Daniel McNamara & Jennifer of Pleasanton, CA; Maryann Notaro of Orlando, FL. He leaves his siblings, Everett McNamara of Fitchburg; Raymond McNamara, Thomas McNamara, and Jane Morano, all of Clinton; Phyllis Mitchell of AL; and Alice Scraggs of Sterling; 28 grandchildren, 24 great-grandchildren, numerous nieces, nephews, and many dear friends. He is predeceased by two grandsons, Firefighter Martin H. McNamara V, and Philip O’Toole, Jr., and great-grandson Patrick Kane Gaw.
Marty was born in Clinton to the late Martin H. McNamara, Jr. & Alice (Hutchins) McNamara. He graduated from the Clinton High School, Class of 1945, and enlisted to proudly serve our nation in the United States Navy. He was assigned to service in Guam during WWII and was honorably discharged as a Motor Machinist’s Mate Third Class. Marty returned home safely to begin a thirty year career with the MA Registry of Motor Vehicles, retiring in 1989 as Director of Law Enforcement. He was actively involved in local politics, having served two terms as a member of the Clinton School Committee, two terms as a member of the Board of Selectmen, and numerous years as a member of the Clinton Finance Committee. A proud patriot, he held membership with the Veterans of Foreign Wars and American Legion. He was a man of great faith, parishioner of St. John the Evangelist Church in Clinton and 4th degree Knight of Columbus. Mr. McNamara enjoyed winters in Florida, summers in Wells, Maine, and was happiest when surrounded by his children, grandchildren, and great-grandchildren. A Mass of Christian Burial will be celebrated at 10AM on Monday, December 12, 2016 in St. John the Evangelist Church, 80 Union St., Clinton, with burial to follow in St. John’s Cemetery, Lancaster. Attendees are requested to meet directly at church on Monday morning. No calling hours will be held. Memorial contributions may be made in memory of Martin H. McNamara III to either Firefighter Martin H. McNamara V Memorial Foundation, 33 Mount View Drive, Clinton, MA 01510, or to UMass Memorial-Clinton Hospital-Geriatric Medical Unit, 201 Highland St., Clinton, MA 01510. Funeral arrangements are entrusted to the care of the Philbin-Comeau Funeral Home, 176 Water St., Clinton, MA 01510. Online condolences may be placed at www.philbincomeaufh.com