In Memory of
Genevieve Barbara
Ray (Grant)
1927 -
2016
Click above to light a memorial candle.
Menu
Send Flowers
Plant a Tree In Memory of Your Loved One
Click Here 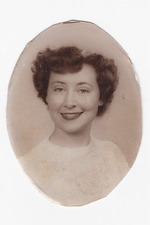 Lancaster-Genevieve (Grant) Ray, 89, formerly of Abington and Marco Island, FL, passed away peacefully at River Terrace Healthcare in Lancaster on Sunday, November 13, 2016. She is preceded in death by her beloved husband of 47 years, Harry E. Ray, Jr., who died in 2000. She is survived by her two daughters, Joanne Ray of Clinton; and Donna Viens and her companion Joel Ake of North Naples, FL; five grandchildren, Paul “Rocky” DellaValle and his wife Michelle of Lunenburg, MA; Christopher Viens of Houston, TX; Jewel DellaValle of St. Paul, MN; Nicholas Viens of Bonita Springs, FL; and Lisa DellaValle of Hudson, NH; two great-grandchildren, Lucy and Reed DellaValle; numerous nieces, nephews, and many dear friends. She is pre-deceased by her siblings, Irene Yukins and Inas, Coleman, Willard, and Gerald Grant.
Genevieve was born in Waterville, Maine on May, 1, 1927, daughter of the late Hiram Coleman Grant and Jessie (Currie) Grant. She was raised in Rockland, MA, attended local schools and graduated from Rockland High School. She obtained her Bachelor’s Degree from Nasson College in Springvale, Maine and taught Home Economics and other subjects at Northampton High School and Brockton High School before raising her family. She later went to work as an advocate for the Brockton Area Association for Retarded Children (BAARC), where she was employed for more than thirty years. Upon her retirement at age 75, she received a commendation and was recognized by then Governor Weld for her commitment and dedication the BAARC. Genevieve was a devout member of the United Church of Christ in Abington, MA where she sang in the choir, and held membership with the Pilgrim Chapter No. 89 of the Eastern Star. She was a fierce competitor in the card game of Bridge, and enjoyed skiing, yoga and playing tennis. Funeral services and burial will be held privately under the direction of the Philbin-Comeau Funeral Home, 176 Water St., Clinton. Memorial contributions may be made in memory of Genevieve Ray to: The Item Appeal, c/o Clinton Savings Bank, 200 Church St., Clinton, MA 01510. Online condolences may be placed at www.philbincomeaufh.com