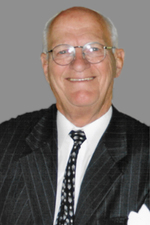 Lancaster-Ronald W. Davidson, 82, passed away peacefully at home surrounded by his loving family on Monday, November 7, 2016. He is preceded in death by his beloved wife of fifty years, Carol Ann (Marston) Davidson. He is survived by his two daughters & their husbands, Diane Roux & Michael of Lancaster; Nancy Merchant & Al of Bolton; 3 grandchildren, Michael D. Roux & wife Deborah of Andover; Jennifer Berube & husband Matthew of Goffstown, NH; and Kelley Brennan of Bolton; 4 great-grandchildren, Joshua, Rileigh, Mikayla, and Benjamin Roux; several nieces, nephews, and many dear friends. He is pre-deceased by his siblings, John “Jack” Davidson, Irene Casson, Anne Anderson, and twin-brother Donald Davidson. Ronald was born in Clinton to the late John & Irene (Loewindorff) Davidson. He attended local schools and graduated from the Clinton High School Class of 1951. A talented athlete, Ronnie excelled as a member of the Clinton Gaels Varsity football team and later competed in semi-pro football. An avid golfer, he worked from a young age with his family in business on the grounds of Runaway Brook Golf Club in Bolton, which is today The International, and enjoyed playing the game throughout his lifetime. Ronnie proudly served in the US Army National Guard and was deployed to assist officials during the 1953 Worcester Tornado. His professional career began with the Van Brode Company in Clinton before he joined Raytheon, from where he ultimately retired as Program Manager of Government Relations after 30 years of employment. He was an active member of the Trinity Lodge in Clinton. Ronnie enjoyed playing Keno, winters in Naples, Florida, and time spent in the company of his family. He will be forever missed and remembered lovingly as a devoted husband, father, grandfather, brother, uncle, and friend. A Funeral Service will be celebrated at 11AM on Thursday, November 10, 2016 in the Philbin-Comeau Funeral Home, 176 Water St., Clinton, with burial to follow in Woodlawn Cemetery. Calling hours will be held in the funeral home prior to services on Thursday morning from 9 until 11AM. Memorial contributions may be made in memory of Ronald W. Davidson to: American Cancer Society, 43 Nagog Park, Suite 110, Acton, MA 01720. Online condolences may be placed at www.philbincomeaufh.com