In Memory of
Helen T.
Sesia (Lipka)
1919 - 2016
Click above to light a memorial candle.
Memorial Candle Tribute From
Philbin-Comeau Funeral Home
"We are honored to provide this Book of Memories to the family."
View full message >>>
Memorial Candle Tribute From
Eric, Wendy & Emma
"With love for our Ma Sesia "
View full message >>>
Send Flowers
Plant a Tree In Memory of Your Loved One
Click Here
Menu 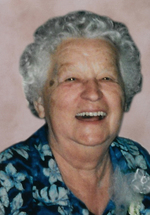 Lancaster-Helen T. (Lipka) Sesia, 97, passed away peacefully in her home surrounded by her loving family on Sunday, October 9, 2016. She is preceded in death by her beloved husband of 43 years, Aldo M. Sesia. She is survived by her children and their spouses, Theresa Lynch & John of Lancaster; Constance Frisch, wife of the late William Frisch of Clinton; Patricia Pittman, with whom she lived of Lancaster; Judith Wallat & Kurt of Clinton; Donna Burton, wife of the late Thomas Burton, of Clinton; and Aldo Sesia, Jr. & wife Anastasia Carruth of Cambridge. She leaves her siblings & their spouses; Theresa LeBlanc of Fitchburg; Charlotte Wilson of Sterling; Edward Lipka & Shirley of Berlin; Donald Lipka, Henry Lipka, both of Clinton; Walter Lipka & Francine of CT; sister-in-law Janet Lipka of Clinton; 20 grandchildren, 13 great-grandchildren, numerous nieces, nephews and dear friends. She is pre-deceased by four brothers, Stanley, Joseph, William, and Vincent Lipka.
Helen was born in Clinton to the late Stanley & Antoinette (Krawczyk) Lipka, and attended local schools. She devoted herself to raising her family as a full time homemaker. Helen took pleasure in weekend road trips and was an avid reader. She will be dearly missed as the matriarch of her family and lovingly remembered as a dedicated mother, grandmother, great-grandmother, sister, aunt, and friend. A Funeral Service will be celebrated at 11AM on Wednesday, October 12, 2016 in the Philbin-Comeau Funeral Home, 176 Water St., Clinton, with burial to follow in St. John’s Cemetery, Lancaster. Calling hours will be held prior to services Wednesday morning from 9:30 until 11AM. Memorial contributions may be made in memory of Helen Sesia to: Lancaster Firefighters Association, 1055 Main St., Lancaster, MA 01523, or to Dana Farber Cancer Institute, P.O. Box 849168, Boston, MA 02284. Online condolences may be placed at www.philbincomeaufh.com