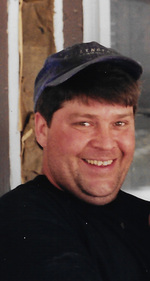 North Woodstock, NH-Daniel E. Quinn, 52, died unexpectedly on Wednesday, September 28, 2016 after being stricken ill at home. He is survived by his loving wife of 26 years, Patricia Ann (Seed) Quinn; his daughter, Nicole Warner & husband Jermaine of Newton; 2 grandchildren, Abrianna & Jermaine Warner, Jr.; his father, John M. Quinn, Sr. of Maynard; siblings and their spouses, Beverly Wheeler & Robert of Berlin; Yvonne Quinn of Clinton; Gregory Quinn of Maynard; and Charles Quinn of Clinton; numerous aunts, uncles, nieces, nephews, cousins, and dear friends. He is pre-deceased by his mother Marian E. (Law) Quinn Thorn, and two brothers, Robert Quinn and John Michael Quinn, Jr.
Dan was born in Natick, raised in Stow and Berlin and attended schools in Wellesley. Throughout his career as a truck driver Dan was employed locally for Sons of Kristoff, Orlando Trucking, and McGeoghan Waste Services before relocating to North Woodstock, NH. He was an automobile enthusiast who loved to wheel and deal in cars, trucks, and motorcycles. Dan most enjoyed time spent in the company of family and friends and will be forever missed and lovingly remembered by all who had the pleasure to have known him. A Funeral Service will be celebrated at 10AM on Monday, October 3, 2016 in the Philbin-Comeau Funeral Home, 176 Water St., Clinton, with burial to follow in Pine Grove Cemetery, Boylston. A calling hour will be held Monday morning prior to services from 9 until 10AM. Memorial contributions may be made in memory of Danny Quinn to Linwood Ambulance Service, P.O. Box 26 North Woodstock, NH, 03262. Online condolences may be placed at www.philbincomeaufh.com